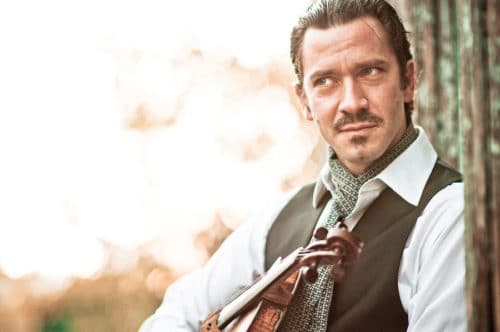 Konstantin Popović began his violin studies at the age of five in Belgrade, Yugoslavia, where he was acknowledged as the most promising beginner violinist by the members of the board of education for strings.

Parallel to his achievements in violin, at the age of seven, Konstantin was appointed vocal soloist in a renowned youth choir Drinka Pavlovic.

After graduation, Konstantin immigrated to Toronto, Canada where he continued his studies at the University of Toronto in the music performance department under Leo Wigdorchik.

In 2000, Konstantin became the Assistant Concertmaster of the Windsor Symphony Orchestra. That year, he won an equivalent position in Sinfonia Toronto, a string orchestra comprised of fourteen members.

Konstantin has been featured as a violin soloist on numerous tracks of Kosta Arnakouros’ instrumental CD Mediterranean Rendezvous. He also did studio work for composer-arranger Charles Cozens of Somerset Entertainment and was featured as a first violinist of a string quartet on the same recording.

Konstantin plays regularly with Wellington Music agency which he co-founded with cellist Orsolya Lengyel in 1997. Tino is a current member of the string trio pop band The Guitar Guys, Punjabi dhol band The Folk Guys and also has a solo pop violin act Tino Pop Violin. Tino is highly regarded as a Bollywood-style violinist.

Of all his achievements Mr. Popović puts most value on the arrivals of his children Dimitri and Tatiana and is immeasurably grateful to his wife Dawn for all her support.